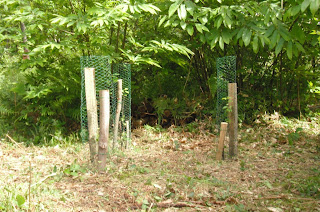 The high winds took their toll on the tent. The fabric was fine and the guy-lines mostly held, but some of the fibreglass poles snapped. On a later visit we found more high winds had felled some standing deadwood onto the spot where the tent had been; maybe the fates are trying to tell us something! 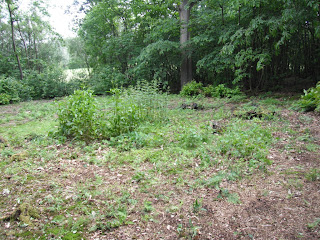 Work since last post has included tidying up the last logs of last winter’s coppicing into piles, pulling and cutting the rising bracken, bramble and birch to keep the glade open for other plants, trimming back the opening from the field to the glade (so the butterflies can get in easier; apparently some don’t like flying up over trees), plus replacing spiral plastic tree guards (rubbish) with stakes and wire guards. These new guards let more light in, give more space to grow and are taller so offer more protection. Highlight has been discovering that one of our bird boxes has been used by some blue tits raising their brood. 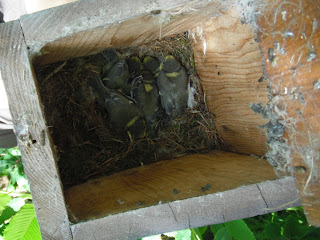 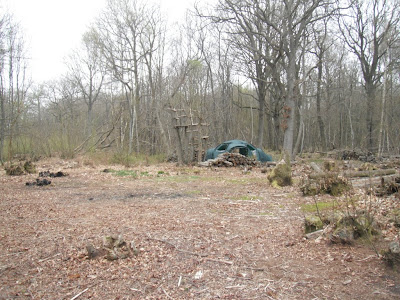 First post for ages and ages. But we haven’t been idle in the woods. Over the winter we have been coppicing again; next to the area where we started the coppicing a few years ago. We didn’t get quite as large an area done this time as there was only me chainsawing (in previous years my dad and brother were more involved) but Tom did come along and do some felling with is axe so that was a help and julie has been doing a great job processing what we felled. Yesterday in the woods looked like spring; the honeysuckle and birch in leaf and the buds are starting to open on the chestnut too, the first bluebells are now flowering and there’s plenty of pretty little white anemones. The first few heads of bracken are also appearing in the clearing so managing those will again be a regular job in the months ahead; there’s also some birch saplings springing up which will need managing to maintain the glade for wildflowers and all they bring. As well as tidying up from the winter’s coppicing by burning most of the stuff that is too small for logs, we also put up the tent. This is our old one from about 10 years ago and if it survives the winds will be a shelter when needed during visits to the woods. 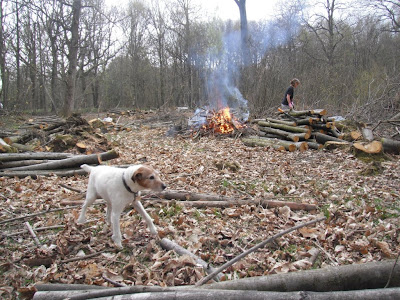 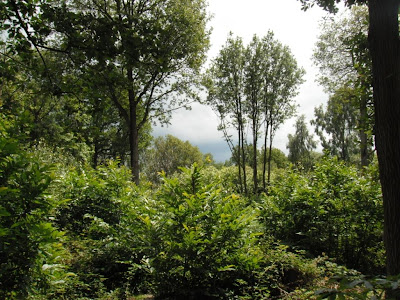 After being led to believe (by the council) that permitted development approval for the shelter was just a cheque and form away, and after several months of follow-up to-ing and fro-ing, we have been forced to take down the shelter. Very annoying especially as they seemed to say one thing then pointed to something else. Advice for anyone else planning to build a shelter or whatever in their wood; provide evidence of what you are using the wood for (even if it isn’t asked for in the form) such as copy of woodland management plan and photos of work done; don’t assume what the council tells you is the whole story (we were told one thing in letter, but there was info filed online that we weren’t aware of that would have clarified the situation a lot earlier). Considering the location next to a SSSI and close to a public footpath it was the right decision to go the official route rather than finish it then have to take it down; but if in a secluded non-SSSI wood with no footpath then I’d think about whether to just build something with low impact in keeping with the woods and hope for the best. The most annoying thing is not taking it down, but that it’s OK to have an ugly steel shipping container but not a small wooden shelter. 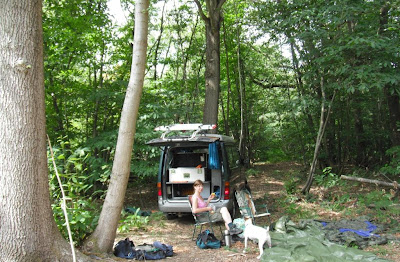 The Bongo is great, easy to drive right into the woods and very comfy to sleep in. Our visits since last posting have mostly seen us doing general management such as cutting back branches and leaning trees to keep the footpath free and controlling the bracken in the clearing so that other plants can grow and increase the diversity. We have more variety there now including hedge woundwort, buttercups, nettles and several things we don’t recognise. A big thanks to Rob for giving us the IR camera which has captured shots of rabbits, squirrels, foxes, deer and a woodcock over the past month. Deer shots tended to be from their rear so we think maybe they have a circuit route they follow; we’ll point the camera the other way and see if we get more faces than tails. 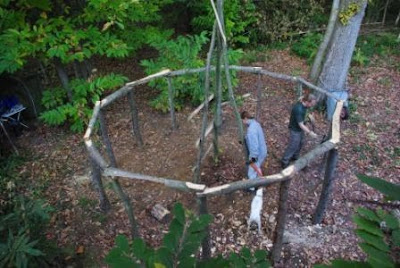 It’s been a while since the last post but we have not been idle in the woods. A few trees at the edge of the glade have been felled and put to good use as posts for the ‘forestry shelter’ we are building. Construction was delayed by the local planners but they have now been provided with evidence that the wood is being managed for forestry and that seems to have satisfied them. This is inspired by the classic roundhouses but is unlikely to see any wattle, daub or thatch; we are building for practicality rather than reconstructing the past so plan ‘A’ will be a tarpaulin roof. A central tripod construction adds stability as well as supporting the roof timbers and doubles as somewhere to work with the fro that Santa Claus bought (he also bought an axe, both made by the elves at Grandfors). The fro will be really useful in splitting wood for walls and roof supports, and maybe sometime in the future we’ll supplement the tarpaulin with some chestnut shingles. We have also bought a Mazda Bongo which is a 4x4 camper van, so we now have more room for bringing stuff to/from the woods as well as having some weekends away. 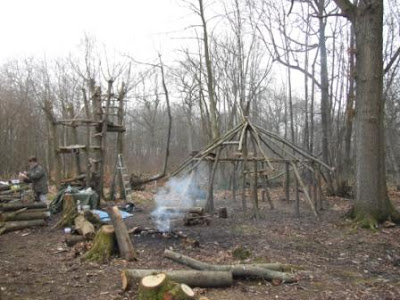 Posted by Ewarwoowar at 13:29 No comments:

So long summer, its September 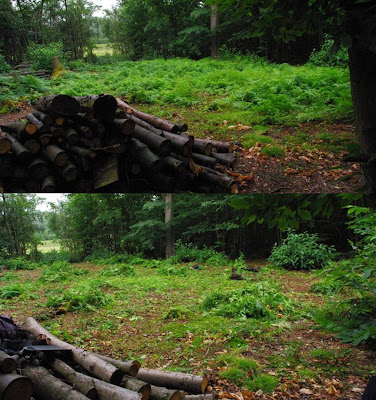 Back to the woods again and, no surprise, the bracken has flourished; so second job was giving that a bashing. Then it was raked into piles so we could see if we’d missed any. Although the bracken is still strong there are other plants competing well with it including grass and some flowering plants that we haven’t yet identified. So hopefully if we keep up with the brushcutting there will be a better balance to suit the butterflies and other wildlife. First job was as usual to walk the woods to check all is OK and see what is about on this visit. Autumn has brought with it many fungi, from little brown jobs to glorious agarics. We also cut back brambles that were again encroaching on the path between car park and glade. While over cups of tea and soup we thought about the option of building a roundhouse and marked out where it could be sited so as not to be a visual impact on the wood s and be convenient to the glade and camp fire. 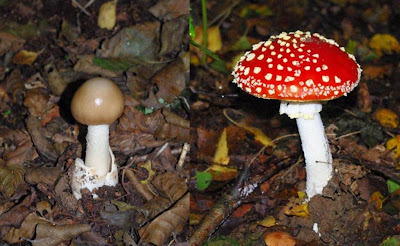 Posted by Ewarwoowar at 19:28 No comments:

July. Stuff and Nothing 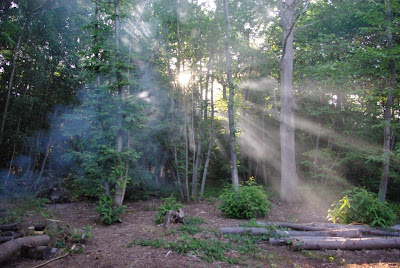 We finally got the time and the weather to camp in the woods this month. It was good to be able to have more time at the woods to do stuff and do nothing too. The something included yet more bracken attack plus cutting back some bramble, while the nothing included sitting about playing guitar and mandolin, putting rails on the tree camp and attacking cans with rifle and catapult. We also cut back the overgrowth at the side of the track so we can get the car in without risk of scratching it up and this also gave a bit more light to the hedge trees we planted there. For the first time since we bought the wood we have fox gloves flowering, one in the glade and a few more in the area that was coppiced about 18 months ago. We made the most of an early morning to walk from the woods over to Bedgebury pinetum, using our sense of direction rather than a map we got there but not necessarily by the most direct route. It has been very many years since I was last there and it has been developed with new car park, a visitor centre and café, plus a bike shop. It’s a lot more popular now but has lost some of its quiet charm. 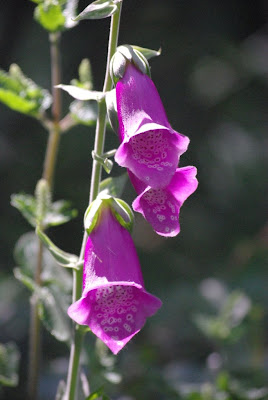 Our campfire cooking has improved with no major burning of sausages etc and the jacket spuds were perfect. There’s something about the flavour of spuds baked in a fire that can’t be beaten. Sam joined us one day and took many photos of texture etc as inspiration for his artistic talents. It was good to have a visit by Silva Energy who collected some logs and we agreed what area would be coppiced this winter. It will be good to get an area coppiced and the wood put to good use by others, but we will also be keeping an area of the wood to work on ourselves more slowly, plus there is great satisfaction in the work itself and seeing the difference that you are making. 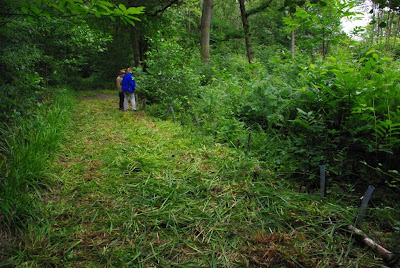 Posted by Ewarwoowar at 19:58 No comments: 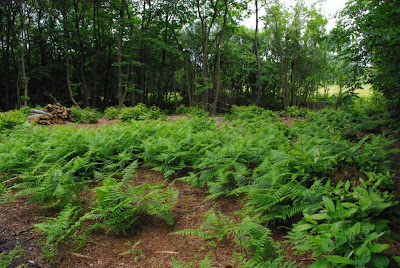 Having missed out on the chance to visit the woods in half term (car issues, there’s always something!) we managed to get there mid-month and the place felt quite jungley with the lush new growth of the trees (and bracken and bramble too). As normal our visit started with a walk around the wood to see what’s what before doing any work or chilling or whatever. The orchids seem to have disappeared and the bluebells flowers are long gone and replaced by seed heads now. The colours of spring are gone and the wood is now vibrant with the glorious greens of summer. We noticed some deer tracks in the mud by the stream, which is now reduced to a trickle. The wayleave isn’t as overgrown as in previous years so didn’t need any cutting back this time. Work focussed on controlling the bracken in the glade so flowering plants have a chance to get established, and completing the reopening of the track from the parking place to the glade. 1 tank of chainsaw fuel was just enough to clear and process the trees that were blocking the route of the track and level off some taller stumps. Rob turned up in his Landy which had no trouble getting along the newly cleared route, happily riding over stumps that we will probably be more cautious in negotiating in 4x4 camper if we do get one at some point. But for now the track will be handy for extracting the logs that are stacked up in the glade. Tom spent time plinking cans and attacking bracken with machete and brushcutter, while Julie also attacked bracken and did a great job of getting a fire going so we could cook sausages for lunch. 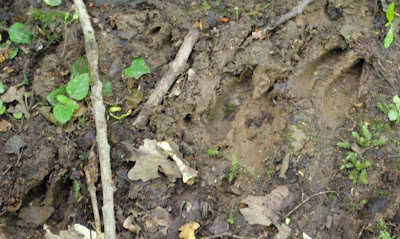 Posted by Ewarwoowar at 13:55 No comments: